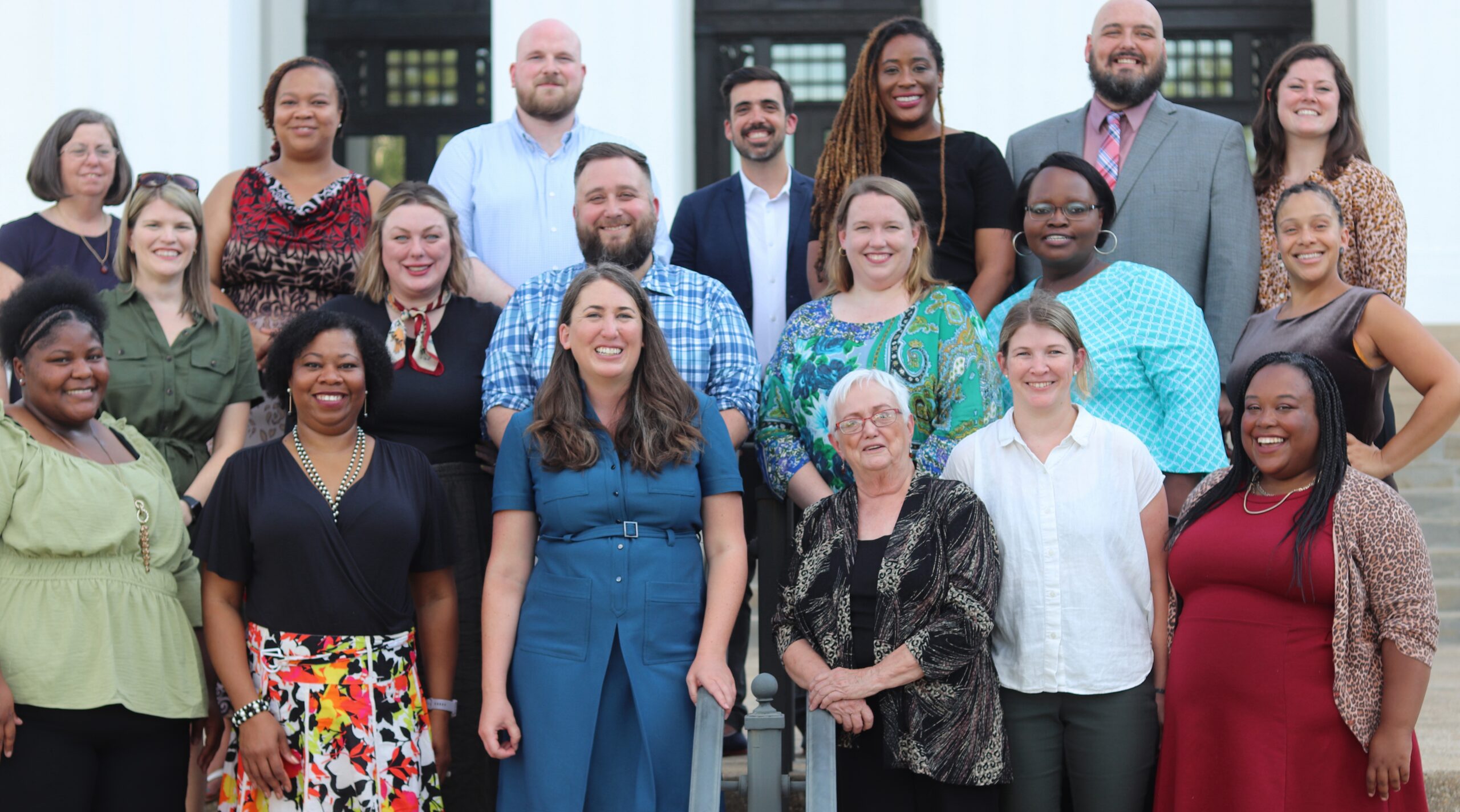 Robyn Hyden is executive director of Alabama Arise and Arise's 501(c)(4) affiliate, Alabama Arise Action. Robyn is a Pelham native, a Vanderbilt University graduate and a lifelong Alabamian who has worked in community development, communications and fundraising with nonprofits including Alabama Possible, Urban Ministry and the United Way of Central Alabama. Before returning to Arise as ED in 2018, she worked as one of Arise’s north Alabama organizers.

Robyn is passionate about engaging community members and directly impacted people in the policymaking process. She has led Arise to launch the Cover Alabama coalition, the Hunger Free Alabama coalition and the Worker Power Project. She was a founding board member of Alabama Forward, a state director for the League of Women Voters of Alabama and a graduate of the Alabama Leadership Initiative. Robyn lives with her husband, Zac, in Montgomery, where she is an active member of First Christian Church.

Presdelane (Pres) Harris is Arise's organizing director. She has worked for Arise since its founding in 1994 and has a B.S. in justice and public safety from Auburn University at Montgomery and an M.S. in management from Troy University. She has lived in Montgomery her entire life and enjoys spending time with family and friends, working in her church, watching movies, and singing along with gospel/ inspirational CDs.

Chris Sanders is Arise's communications director. He is a lifelong Alabama resident, a member of the Alabama State Bar and a two-time graduate of the University of Alabama, where he earned a J.D. and a B.A. in journalism and political science. He chairs the Communications Advisory Committee for the State Priorities Partnership and serves as an advisor for the national Think Big narrative learning community.

Chris is a founding member of the University of Alabama Community Affairs Board of Advisors and served as the founding chair of the board's Public Health Committee. He also serves on the editorial board of The Alabama Lawyer. Chris is a former editor-in-chief of The Crimson White and was an articles editor for the Alabama Law Review. He joined the Arise staff in 2007 as a policy analyst on tax and budget issues and became communications director in 2013.

Jacob Smith is Arise's development director. In his role, he ensures the organization's financial stability by overseeing corporate and foundation relationship management and individual giving and membership. Jacob has more than a decade of nonprofit experience in fundraising and program management. Before joining Arise in 2022, Jacob served as the senior director, philanthropy and research at Women's Foundation of Alabama and as assistant director of development at YWCA Central Alabama. Jacob is an Alabama native and holds an M.P.A. from the University of Alabama at Birmingham and a B.A. in public relations from Auburn University. Outside of work, Jacob enjoys hiking, cooking and scoping out new restaurants in Birmingham.

Akiesha Anderson is Arise’s policy and advocacy director. In this role, she leads a team of policy advocates and analysts committed to improving the lives of Alabamians who are marginalized by poverty. Akiesha is a legislative and policy attorney who joined Arise in 2022. She has more than a decade of experience working in the public sector and nonprofit realms and striving to make society more equitable for marginalized groups. Akiesha grew up in Montgomery and is a graduate of Alabama State University, Auburn University at Montgomery and the University of Alabama School of Law. She has a bachelor’s degree in sociology with a minor in business management; a master’s degree in public administration; and a law degree with a certificate in governmental affairs.

McKenzie Burton joined Arise as a development associate in 2021. She has a background in electoral campaigns at many levels, where she worked to develop and implement grassroots field strategies. Before then, she worked in youth ministry and outreach in the Episcopal Church. McKenzie graduated high school in Birmingham and has a dual B.A. from the University of Georgia in history and women’s studies.

Celida Soto Garcia is Arise’s hunger policy advocate. She is a Birmingham resident and graduated from Rutgers University with a dual degree in administration of justice and sociology. Celida grew up as a Jersey girl speaking Spanish first, and she has participated in movements related to economic injustice, women’s rights, food sovereignty, public safety and criminal justice reform. She came to Arise in 2019 with a long and diverse work experience, ranging from child welfare services to disaster recovery assistance to fostering community engagement as an educational liaison with the UAB Minority Health and Health Disparities Research Center. Celida seeks to contribute to the popular education needed to grow, connect and build in any language that speaks to connectivity.

Carol Gundlach has been an Arise policy analyst since 2013. She focuses on issues related to taxes and budgets. Carol previously worked as executive director of the Alabama Coalition Against Domestic Violence and as state coordinator of the Alabama Coalition Against Hunger. She has an M.S.W. degree and has taught social work policy and community organization at Auburn University and the University of Alabama.

Jennifer Harris joined Arise in 2022 as the health policy advocate. Born and raised in Alabama, she is a two-time graduate of the University of Alabama, where she earned her J.D. and B.S.W. Jennifer has worked her entire career in advocacy and nonprofit administration. Most recently, she was the executive director of the Sickle Cell Association – West Alabama Chapter Inc. Jennifer previously worked as a social worker trainer/recruiter for prospective foster and adoptive parents and was the executive director of Shoals CASA (Court Appointed Special Advocates) in Florence.

Stan Johnson has been a contract organizer with Arise since 1995. He has a B.A. from California State University, Fresno, and a master's degree in urban and regional planning from Alabama A&M University. Based in Birmingham, he works to expand Arise's outreach and growth in north Alabama.

Mike Nicholson is an Arise policy analyst whose work covers numerous consumer and human rights issues, including payday and title lending reform, public transportation and criminal justice policies. Mike originally joined Arise as an organizer in 2018 before moving to the policy team in 2022. He holds a B.A. in political science and sociology from the University of Montevallo and a Ph.D. in political science from the University of Alabama.

Matt Okarmus joined Arise as a communications associate in 2018. After growing up in the Wiregrass area, he attended Auburn University and earned a B.A. in journalism. He went on to work for the Montgomery Advertiser for six years and the Opelika-Auburn News for two years.

Whit Sides is Arise’s Cover Alabama storyteller. A writer and journalist based in Birmingham, Whit spent more than a decade working in media and advertising before returning to college as a new mom. She earned a B.A. in mass communication from the University of Alabama at Birmingham. Before joining Arise in 2020, she investigated stories involving the opioid epidemic, social justice and white supremacy as a reporter in both radio and print. She recently worked with a local startup to produce N95 masks for first responders and front-line workers during the COVID-19 pandemic.

Whit’s family has strong roots in rural northwest Alabama, providing her with valuable perspective and strong motivation to seek out stories of inequity and injustice from every corner of our state. In partnership with the Cover Alabama Coalition, Whit spends her time as a storyteller highlighting the experiences of uninsured Alabamians and empowering people caught in the state’s health coverage gap. If you’re willing to share your health care story, she would love to hear from you.

Juliette Singleton is Arise's office manager. She volunteered with Arise since 2007 before joining the staff in 2012. Since then, she has provided administrative support and reception duties in the Montgomery office. She works closely with the development team and assists numerous other staff members as well. Juliette has the kind voice and big smile that more than likely will greet you when you call or come to the Arise office.

Debbie Smith is Arise's Cover Alabama campaign director. She is from Meridian, Miss., and has B.A. and M.S. degrees in speech communication from the University of Southern Mississippi. Based in Fort Payne, Debbie joined Arise as a north Alabama organizer in 2018 and moved to her current position in 2022. Before then, she worked at the Mississippi Health Advocacy Program for six years to improve health coverage for low-income and underserved Mississippians. She enjoys spending time with her family and exploring the Lookout Mountain and Tennessee Valley areas.

David Stout is Arise's legislative affairs coordinator. He joined the Arise team in 2013 after spending 15 years editing the Alabama School Journal. Before then, he served as a member of the Alabama Legislature and as mayor of Fort Payne for 13 years. He has a B.A. from Jacksonville State University and an M.A. in American history from the University of Alabama.

Formeeca Tripp joined Arise as an organizer in 2022. She has served as a community health worker addressing health disparities and providing free COVID-19 testing and vaccine sign-ups at mobile sites and clinics throughout southeast and east-central Alabama. She also served as an intervention/behavior specialist for the Alabama Council on Human Relations, advocating for children, families and education staff.

Formeeca is originally from Syracuse, N.Y., and has lived in Auburn for more than 12 years. She is a single mother of two children, one of whom has autism. Formeeca is pursuing her undergraduate degree in social work at Auburn University. She is set to graduate in December 2022 and will be the first in her family ever to receive an undergraduate degree.

Dev Wakeley is Arise's worker policy advocate. He originally joined Arise as a policy analyst in 2018 before moving to his current role in 2022. Dev is a Gardendale native who has a B.A. in philosophy from Franklin & Marshall College and a J.D. from the University of Alabama. He was admitted to the Alabama State Bar in 2017. During law school, he served on the Public Interest Student Board executive committee and the Alabama Civil Rights and Civil Liberties Law Review. He also worked on the Elder Law Clinic through the UA School of Law and the Clemency Project for the Federal Defenders Program for the Middle District of Alabama.

Whitney Washington joined Arise in 2020 as a communications associate. She returned to Alabama after living in Nashville for the previous eight years. She has a B.A. in history from the University of Montevallo. Whitney worked as a religious researcher for several years before becoming involved in social justice and politics. Prior to joining Arise, Whitney worked for the Black Lives Matter Global Network, Stand Up Nashville and a political campaign.