After a year of darkness, the light at the end of the tunnel is finally in sight. Promising vaccine news offers hope that public health officials can rein in COVID-19 in the coming months. And as our state and nation seek policy solutions to rebuild from the pandemic’s health and economic devastation, Alabama Arise will seek to advance equity and shared prosperity for Alabamians who are marginalized and excluded.

That vital work won’t be fast or easy. In the meantime, the pandemic’s harrowing toll continues to grow. COVID-19 has killed more than 1.5 million people worldwide, including more than 3,700 Alabamians, and sickened tens of millions. It has fueled a deep recession, caused millions of layoffs and left more than 40% of U.S. households with children struggling to make ends meet. It has stretched hospitals to the breaking point and disrupted education, commerce and social interactions in every community.

COVID-19 has created suffering on a staggering scale. It also has highlighted long-standing economic and racial disparities and underscored the urgency of ending them. A new legislative session and a new presidency will offer new opportunities to right those wrongs in 2021 and beyond.

The federal and state work ahead

The most immediate needs will require federal action. Congress must extend state aid and additional unemployment insurance (UI) benefits before they expire this month. But those extensions should be just a down payment on a more comprehensive response.

We’ll also keep working for better state policies when the Legislature returns in February. Our top focus will be Medicaid expansion, which we’ll pursue along with partners in the Cover Alabama Coalition. Expansion would cover more than 340,000 Alabamians with low incomes and ease the financial strain on rural hospitals. It also would attack structural health care disparities that led COVID-19 to take a disproportionate toll on Black Alabamians.

Arise’s work won’t stop there. We’ll support legislation to expand voting rights and ensure broadband internet access for all Alabamians. We’ll seek to increase consumer protections and overhaul the state’s criminal justice system. And we’ll fight to untax groceries once and for all.

Breakthroughs on many of these issues won’t be fast or easy. But together, we’ll emerge from dark times into the light of a brighter, more inclusive future for Alabama.

“Arise believes in dignity, equity and justice for all Alabamians,” Arise executive director Robyn Hyden said. “And our 2021 issue priorities would break down many of the policy barriers that keep people in poverty. We can and will build a more inclusive future for our state.”

See our graphic below or click here for more on our 2021 legislative agenda. 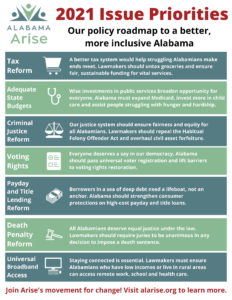 We must bring light to a dark winter

As I reflect on 2020, I’m enraged by the political and policy failures that have led to the devastating public health and economic crisis we’re facing.

Hundreds of thousands are dead, sick or suffering. Evictions, hunger and homelessness are increasing rapidly. But federal leaders have failed to make sure people have the resources and support needed to fight this virus effectively. The people suffering the most – Black, Indigenous and Latino communities, low-wage workers and women – desperately need the safety net that has been slowly dismantled over the past decades.

In Alabama, lawmakers seem more focused on protecting corporate interests, not “we the people,” as though the economy can be strong while large numbers of people are dying. This narrative is poisonous, and we must fight it.

Arise will continue working for universal health care access and adequate COVID-19 relief. Early next year, we’ll also release a report on the toll this crisis has taken on low-wage workers, including many on the pandemic front lines.

During this grim season, it’s on us to fight for the future we hope to see: a world where everyone is valued, included and safe from harm.

Alabama Arise members are the force behind sustained advocacy for policies that improve the lives of Alabamians with low incomes.

When we come together across lines of difference to demand fair and just policies for all Alabamians, we are able to hold our lawmakers accountable. Identifying yourself to an elected official as an Arise member makes a tremendous difference. It means you have a community of support as you work toward a more equitable Alabama.

As an indication of your personal commitment to Arise’s mission, individual membership requires a financial contribution each year. We suggest a donation of $15 or more, but we strive to ensure money is not a barrier to membership.

You can keep your membership current with a gift in any amount with which you feel comfortable! Your contribution makes you eligible to vote during membership meetings, including our annual meetings, where members choose our issue priorities.

Our goal is to reach 2,020 individual members by the end of 2020. Please click here to join or renew your membership today!

Amber Haywood is Arise’s new development director. She is an Alabama native who grew up just outside of Birmingham. She graduated from the University of Alabama at Birmingham, where she earned a B.A. in African American Studies and led the undergraduate chapter of the NAACP. Before joining Arise, Amber served as the director of development for Teach for America Alabama, and as a development consultant for YR Media, Brothers @ and the Black Lives Matter Global Network Foundation.

Whit Sides is Arise’s story collection coordinator. A writer and journalist based in Birmingham, Whit spent more than a decade working in media and advertising before returning to college as a new mom. She earned a B.A. in mass communication from the University of Alabama at Birmingham. Before joining Arise in 2020, she investigated stories involving the opioid epidemic, social justice and white supremacy as a reporter in both radio and print. In partnership with the Cover Alabama Coalition, Whit spends her time as a storyteller highlighting the experiences of uninsured Alabamians and empowering people caught in the state’s health coverage gap.

Whitney Washington joined Arise in 2020 as a communications associate. She recently returned to Alabama after living in Nashville for the past eight years. She has a B.A. in history from the University of Montevallo. Whitney worked as a religious researcher for several years before becoming involved in social justice and politics. Prior to joining Arise, Whitney worked for the Black Lives Matter Global Network, Stand Up Nashville and a political campaign.

Kate Blankinship has joined Arise as an Emerson National Hunger Fellow from the Congressional Hunger Center. Originally from Memphis, Kate graduated from the University of Chicago with a major in linguistics. As an undergraduate, Kate was heavily involved in public service, working with local preschools and community-based organizations while pursuing independent and supervised research on anti-poverty, child welfare and other social welfare programs. As a research assistant, Kate analyzed poor civil litigants’ access to the federal legal system, the availability of public health resources in tribal communities and U.S. territories, and the resilience of SNAP and Medicaid in the current administration. Before joining Arise, Kate served with Americorps, working with the nonprofit College Possible in Chicago.

Curtis Hills has joined Arise as an Emerson National Hunger Fellow from the Congressional Hunger Center. A native of Lexington, Miss., Curtis graduated from the University of Mississippi with a degree in English. His passion for social justice began in the eighth grade, while working with the nonprofit Nollie Jenkins Center to help dismantle the school-to-prison pipeline and research ways to alleviate food insecurity in Holmes County. A former Associated Student Body Judicial Council member and congressional intern for Rep. Bennie Thompson, Curtis also served as a Catalyzing Entrepreneurship and Economic Development (CEED) Scholar with the McLean Institute. Curtis spent the summer of his junior year helping migrant families in Spain find housing and jobs and facilitating career development and resume-building workshops in Holmes County.

Alabama’s 2021 legislative session begins Feb. 2. It will not proceed as usual given the extraordinary times in which we live. But we still need to be prepared to move our issues forward. This series of briefings will both inform and equip us to act strategically to continue the work for a better Alabama for all.

Please join us at any or all of these sessions! Click here to get more information and register today.